The Shang Han Lun (伤寒论) is certainly among the classical texts of Chinese medicine, one of the best known and commented.

The author of the Shang Han Lun is Zhang Zhong Jing (150-219 AD), who lived during the Eastern Han dynasty (150-289 AD). The meaning of the title Shang Han Lun is a “Classic of Cold Diseases”, and is considered the reference text for treating epidemics, which were widespread in the period of the Han dynasty.

Zhang Zhong Jing was particularly interested in understanding how the disease progressed within the body following penetration consequent to aggression by external climatic pathogenic factors.

In the period of the Song dynasty, the Shang Han Lun was reorganized by the Imperial Academy of Medicine and the definitive version that dates back to 1156 AD. 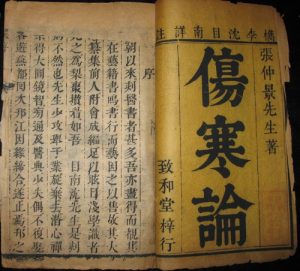