Earth (土 tǔ) is one of the Wu Xing (Chinese: 五行; pinyin: wǔxíng), also known as the Five Elements, Five Phases, the Five Agents, the Five Movements, Five Processes, the Five Steps/Stages and the Five Planets or “the five types of chi dominating at different times“.
We decided to use the word Element to describe it because it is the most used even if it is not the most accurate.

Earth Element features can slightly change according to the model you are following. In the evolution of the [5ElementTheory]], the Earth Element, that was at the beginning the central element, the pivot that allowed all other to transform into each-other, was moved on the side of other 4 Elements between Fire Element (火 huǒ) and Metal Element (金 jīn).

Related Features can vary if you refers to: 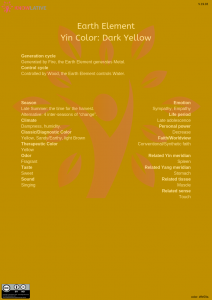