The Wu Xing (Chinese: 五行; pinyin: wǔxíng), also known as the Five Elements, Five Phases, the Five Agents, the Five Movements, Five Processes, the Five Steps/Stages and the Five Planets of significant gravity: Mars-火, Mercury-水, Jupiter-木, Venus-金, Saturn-土 is the short form of “Wǔ zhǒng liúxíng zhī qì” (五種流行之氣) or “the five types of chi dominating at different times”.
It is a fivefold conceptual scheme that many traditional Chinese fields used to explain a wide array of phenomena, from cosmic cycles to the interaction between internal organs, and from the succession of political regimes to the properties of medicinal drugs.
The “Five Phases” are Wood (木 mù), Fire (火 huǒ), Earth (土 tǔ), Metal (金 jīn), and Water (水 shuǐ). This order of presentation is known as the “mutual generation” (相生 xiāngshēng) sequence. In the order of “mutual overcoming” (相剋/相克 xiāngkè), they are Wood, Earth, Water, Fire, and Metal (see picture).
The system of five phases was used for describing interactions and relationships between phenomena. After it came to maturity in the second or the first century BC, during the Han dynasty, this system was adopted in many fields of early Chinese thought, including seemingly disparate fields such as geomancy or Feng shui, astrology, traditional Chinese medicine, music, military strategy, and martial arts. The system is still used as a reference in Chinese medicine, complementary and alternative medicine and martial arts.

Xing (Chinese: 行) of ‘Wu Xing’ means moving; a planet is called a ‘moving star’ (Chinese: 行星) in Chinese. Wu Xing (Chinese: 五行) originally refers to the five major planets (Jupiter, Saturn, Mercury, Mars, Venus) that create five dimensions of earth life.
“Wu Xing” is also widely translated as “Five Elements” and this is used extensively by many including practitioners of Five Element acupuncture. This translation arose by false analogy with the Western system of the four elements. Whereas the classical Greek elements were concerned with substances or natural qualities, the Chinese xíng are “primarily concerned with process and change,” hence the common translation as “phases” or “agents”. By the same token, Mù is thought of as “Tree” rather than “Wood”. The word ‘element’ is thus used within the context of Chinese medicine with a different meaning to its usual meaning.
It should be recognized that the word phase, although commonly preferred, is not perfect. Phase is a better translation for the five seasons (五運 Wǔ Yùn) mentioned below, and so agents or processes might be preferred for the primary term xíng. Manfred Porkert attempts to resolve this by using Evolutive Phase for 五行 Wǔ Xíng and Circuit Phase for 五運 Wǔ Yùn, but these terms are unwieldy.
Some of the Mawangdui Silk Texts (no later than 168 BC) also present the Wu Xing as “five virtues” or types of activities. Within Chinese medicine texts the Wu Xing are also referred to as Wu Yun (Chinese: 五運; wǔ yùn) or a combination of the two characters (Wu Xing-Yun). This correlation emphasizes the correspondence of five elements to five ‘seasons’ (four seasons plus one). Another tradition refers to the Wǔ Xíng as Wǔ Dé (五德), the Five Virtues.

The five phases are around 72 days each and are usually used to describe the state in nature:

The doctrine of five phases describes two cycles, a generating or creation (生, shēng) cycle, also known as “mother-son”, and an overcoming or destruction (剋/克, kè) cycle, also known as “grandfather-grandson”, of interactions between the phases. Within Chinese medicine the effects of these two main relations are further elaborated:


Generating cycle
The common memory jogs, which help to remind in what order the phases are:

Other common words for this cycle include “begets”, “engenders” and “mothers”.

This cycle might also be called “controls”, “restrains” or “fathers”.

And read all the chapter Basic Chinese Medicine. 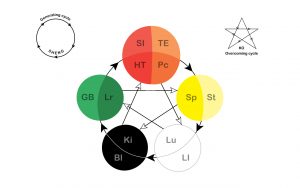