The 7 Elements Command Points is an expansion of the 5 Ancient Shu Points of Traditional Chinese Medicine. It was Richard D. Utt, L.Ac, founder of the branch of Kinesiology know as Applied Physiology, that expanded the concept of 5 Elements Theory to 7 Elements Theory. He has divided the Fire Element into two different Elements (Soverign Fire, composed of HT (Heart Channel – Shou Shao Yin) and SI (Small Intestine Channel – Shou Tai Yang); and Ministerial Fire, composed of PC (Pericardium Channel – Shou Jue Yin) and TH (Triple Heater Channel – Shou Shao Yang)). Then he has added the Air Element (composed of CV (Conception Vessel – Ren Mai) and GV (Governing Vessel – Du Mai)). In this way all the 14 Meridians that has own points belongs to an Element, and all Elements are made of two Meridians, one Yin and one Yang.
Richard D. Utt, L.Ac has also found a Command Point, or Ancient Shu Point, related to the Minisiterial Fire and to the Air Element in each of the 14 Meridians.
Applied Physiology is based on the Holographic Theory, where each single structure contains the information of all structures. In this case, each Meridian contains the informations of all the 7 Elements and all 14 Meridians through the 7 Command Points. 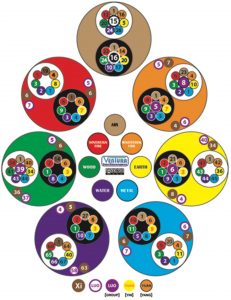