The 5 transporting points (Shu points) are sometimes called Command points or Ancient or Antique points.
In the 5 Elements Theory, one of the supporting columns of Traditional Chinese Medicine, every Element is in direct relation with the other 4. To reflect this close relation, every main meridian has a set of points, called Ancient Shu points, that allow the energy flowing in that meridian to communicate with the other 5 meridians of the same polarity (Yin and Yang).
These 5 points, in every main meridian, are located in the distal part of the limb (arm or leg depending on the meridian you are considering) in the area between the fingers and the elbow and between the toes and knee.
The ancient-Shu points have a name depending on the position they have in the leg or in the forearm. From finger/toes to elbows/knees the energy of the meridians change polarity and the ancient Chinese compared this section of the principal meridians to a river. Thus, from fingers/toes to elbows/knees there is a progression in size and depth of the meridian that is irrespective of the direction of the actual direction of flow of the meridian. We have:

The overall function of these points is:

These points are used to balance muscles in the Tonification and sedation points – Ancient Shu Points – Meridian Correction.
See the pictures in the meridian description to know the Ancient Shu points of that specific meridian. 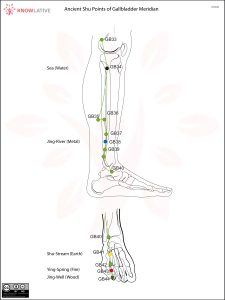