The ankle is formed by the talocrural joint (Picture 1).  It consists of the articulations between the talus bone of the foot and the distal ends of the tibia and fibula of the leg (crural = “leg”). The superior aspect of the talus bone is square-shaped and has three areas of articulation. The top of the talus articulates with the inferior tibia. This is the portion of the ankle joint that carries the body weight between the leg and foot. The sides of the talus are firmly held in position by the articulations with the medial malleolus of the tibia and the lateral malleolus of the fibula, which prevent any side-to-side motion of the talus. The ankle is thus a uniaxial Hinge Joint – Ginglymoid Joint that allows only for dorsiflexion and plantar flexion of the foot. Thus, plantarflexion and dorsiflexion are the main movements that occur at the ankle joint. Eversion and inversion are produced at the other joints of the foot, such as the subtalar joint.

When the body is in the erect position, the foot is at right angles to the leg. The movements of the joint are those of dorsiflexion and extension; dorsiflexion consists in the approximation of the dorsum of the foot to the front of the leg, while in extension the heel is drawn up and the toes pointed downward. The range of movement varies in different individuals from about 50° to 90°. The transverse axis about which movement takes place is slightly oblique. The malleoli tightly embrace the talus in all positions of the joint, so that any slight degree of side-to-side movement which may exist is simply due to stretching of the ligaments of the talofibular syndesmosis, and slight bending of the body of the fibula. The superior articular surface of the talus is broader in front than behind. In dorsiflexion, therefore, greater space is required between the two malleoli. This is obtained by a slight outward rotatory movement of the lower end of the fibula and a stretching of the ligaments of the syndesmosis; this lateral movement is facilitated by a slight gliding at the tibiofibular articulation, and possibly also by the bending of the body of the fibula. 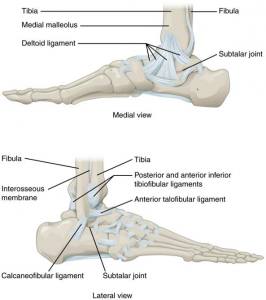