By Alexis Costello (This article was first published in KinesioGeek Magazine Summer 2020 issue: The Power of Physical Structure)

The kind of muscle testing that we do in Specialized and Applied Kinesiology would never have existed if not for the work of a few dedicated chiropractors interested in looking for more holistic ways to work with the body. In this light, it made sense to speak with a chiropractor about our theme of physical structure. Introducing Kais Faddah, born in Finland, trained as an American chiropractor, and who now lives in Costa Rica.

A: Tell us a little bit about your background and your experience with muscle testing?

K: If we go back to the beginning, I was a baseball player and I eventually injured my shoulder pitching. There was a lot of medication and anti-inflammatories, a couple of shots here and there; and everytime I returned to the field it was only a couple of weeks before the same sort of thing started happening again and I got frustrated. I walked into the medical library at my university and began to study shoulders. And I started to deviate from what the doctors were doing and began to strengthen myself in different ways and began looking at the relationship with the cervical spine and I realized I was really fascinated by this. At that time, my major was in physical education and exercise physiology; I added a second major in biology and the pre-med program. One day there was a career day at the school and there was one local chiropractic college that came out. I had never heard the term before, but I went to the table, picked up the book and something just resonated. I told my dad I was going to go to chiropractic school, he said, “OK, but what is that?” And I said, “I don’t know but it just feels right!” I finished the programs in physical education and biology, got the doctorate in chiropractic – and that’s when the education really began.

I started in my private practice and families would come in with questions; moms asking what they can do about these allergies, bedwetting, etc. and that opened up a whole new paradigm. How does the body work and what can we do to get better function? When everything is working the way it’s supposed to, then we have health – that’s how we were created.

In chiropractic college we learn how to manipulate. The key to me was: are we analyzing the body to figure out what it needs, or are we just forcing something to change? Chiropractic is a kind of art form – there’s a philosophy behind it – when you look at it from that perspective, the most important thing is the analysis, not the ‘doing’. So I went through a 100 hour course in Applied Kinesiology to help me figure out what’s going on with the body. The basic heart of chiropractic is that there is an intelligence and wisdom to this body. Our job is to release interference in the body’s communication system, whether that’s in the nervous system or the fascia, etc. If we remove that then the body knows what to do.

A: This is so complimentary to what I do in my work. The body is electrical and if we remove the resistance in the circuit then suddenly the power is there to do whatever it needs to do.

K: In the earlier part of my career I did a lot of muscle testing to figure out: what segment do I have to adjust? What organ is not working at its best? In chiropractic college the analysis isn’t taught – it’s about how to do. But soon more and more people were coming into my office and I was a solo practitioner… My practice grew, and you know, usually the mother comes in first and she sees some changes and then she wants to get the kids in and then finally the husband. Suddenly I’m seeing 80-100 people a day. It’s really challenging to take care of that many people – I had to keep expanding my space and then I would have four adjusting tables in a room and I would go from table to table; making a check, doing an adjustment, letting them breath, moving to the next… I needed to go faster, and one day I just thought, ‘I need to check that atlas.’ And as soon as I thought it, I could see the change in the body. That was the first ‘aha!’ moment of my professional life. Then I started to play around with it. I would think something and then do the muscle test and correlate it. I moved from a more physical muscle testing to a more energetic one. I know (when I do this) I’m talking to the physical matter of a specific area – I’m asking a question and getting an answer. The brain communicates to the body via the nervous system so there is a relationship between thought and the physical. Through this I was able to enter a different level of service.

This was just outside of Seattle and I worked there for 18 years Then at the top of my career I heard this inner voice which said, ‘you need to leave,’ and I moved to Costa Rica!

A: The purpose of this article is to focus back on the structural foundation of the body and why it’s important. Why have you chosen to focus more on structure even though you have some training in the more energetic aspects of healing as well?

K: I have to think, what’s the best thing that I can do for people? You can make a lot of adjustments energetically and sometimes people won’t even know you’re making them. Most of the people who come to see me want that physical release and change. I can get the ball rolling energetically; we have this matter that has a specific energy and vibration. We can touch it, feel it, sense it. We have a sensory system so we can feel and we can sense. I really do believe there is a part of healing that needs to have touch. The word ‘chiropractic’ is Greek, and it means ‘by hand’, so my hands go on people. And they know it; and I know that they know and can feel that there is a change happening! Sometimes when I do some of the subtle stuff, they don’t get that as much. My forte and my skill set is with the physical part of it and I believe that touch is so important for people. We have seen in the last few months how isolation has created problems for people. There are people coming to my office right now who have not been touched in a long time and they are so grateful. My analysis is on the more energetic level, my treatment is more physical.

A: There are some people who have a block against the word chiropractic – maybe they think it’s quackery or maybe someone has done an adjustment and hurt them… Are there any major misconceptions about chiropractic work that you would like to clear up?

K: I have heard a lot of different things over the years. Before I would work on anyone, I would have a consultation. The question I get the most often is, “This isn’t going to cause a stroke is it?” And I ask, “Where did you get that idea from?” And they mention and article they read, or a doctor said this… I’ve been doing this for 26 years now and nothing like that has ever happened. But I also know that there are certain people who will come in your office where you are not going to do a manual adjustment. This is where I sometimes get frustrated with my profession because some won’t do a thorough assessment – the adjustment is the same thing every time and this just creates a new pattern over time. That’s where the word ‘manipulation’ comes in and this is where problems can arise.

There are some people who are very susceptible to injury. They might go to a hairdresser and lay their head over the bowl to have their hair washed and that can push things out of alignment. So as far as a neurological insult or a burst blood vessel – that’s extremely rare, but we have to be aware of that as a possibility. And if I am suspicious that something negative could happen I would do an analysis; some people you barely touch. Some you just stretch a little. It depends on the person.

The second misconception that I would like to clear up; once you see a chiropractor, no, you don’t have to go to one for the rest of your life. Some people are going to require some intensive care. It depends on what’s going on in their life and in their bodies If they’re in a pattern of high stress and repetitive movement / computer work / sitting most of the day; to change the pattern you’ve got to have spaced repetition. But if a person comes in who’s in relatively good shape and their body alignment is alright – some correction might need to take place, but you don’t need to do all that intensive stuff, you can space them out over time. And then there are people who are doing a lot of different things and supporting themselves with nutrition, thoughts and movement – then you move into maintenance, or as I refer to call it – proactive health care. In those cases, I’m looking for any interference before any symptoms show up. So for some people this is a lifestyle choice and some will use it as a treatment for a specific condition.

A: Ideally, once your body finds a state of alignment and balance it goes there more easily.

A: What we take into our body nutritionally and chemically affects the structure, but what you just said there is not intuitive for a lot of people – that eating fast food can create a physical misalignment. How do you explain that to people?

K: Building blocks. Let’s say you’re putting toxins into your body. How does your body react to toxicity? It goes into a protective protocol to keep things away from the organs, we’ll see raised blood sugars, blood pressure might be higher and heartrate might be higher, there might be some neurotoxins crossing into the brain which can alter brain chemistry… Over time, if you don’t release that and get it cleaned out, the body is going to experience some kind of disease process. We correct nutritional deficiencies and clear out toxicities.

A: Are there any resources that you would suggest for people wanting to find out more?

K: There are various organizations in the States, the National Chiropractic Association for example – if you go into their website you’re going to find a lot of references and reading material. Chiropractic is one of the professions that was targeted by the American Medical Association, and from 1930-60s, many chiropractors were arrested and put into jail for practicing medicine without a license. It wasn’t until 1972 when the Supreme Court slapped the AMA’s hand and said, ‘Don’t do that anymore,’ that it stopped. Unfortunately, the infiltration of the medical model has started in chiropractic colleges. Even when I went to school there are only two major differences in training between doctors and chiropractors: at the end, the medical students study minor surgery and pharmacology and chiropractors learn about adjustments and nutrition. Unfortunately, a lot of chiropractors coming out of school now are using it to treat conditions, instead of looking to remove stress and create balance. Doing a search online will bring up a lot of different stuff, go to the associations and you’ll find better information there.

Kais can be reached through www.ballenawellness.com

To read the rest of this issue, visit www.gemskinesiology.com 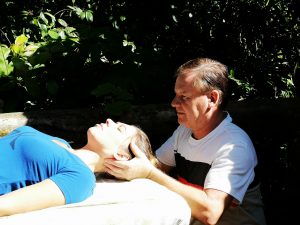