First, locate L5. The next palpable structure in an inferior direction is the most superior sacral spinous process. Palpate in a lateral direction on the level of the sacral processes for the depressions of the sacral foramina. Or: Locate the 4th sacral foramen on the level of the superior end of the rima ani (sometimes a bit more superiorly or inferiorly). Place the little finger on the 4th foramen, then the ring, middle and index fingers on a slightly V-shaped line in a superior direction, palpating for the depressions of the sacral foramina. With the fingers in this position, the index finger will be resting on the 1st foramen (BL 31 (Upper Foramen)), the middle finger on the 2nd foramen (BL 32 (Second Foramen)), the ring finger on the 3rd foramen (BL 33 (Middle Foramen)) and the little finger on the 4th foramen (BL-34). Located on the same level as BL 31 (Upper Foramen)–BL-34 are the points BL 27 (Small Intestine Shu)–BL 30 (White Ring Shu) on the inner branch of BL (Bladder Channel – Zu Tai Yang) (1.5 cun lateral to the midline) as well as BL 53 (Bladder Vitals) (on the level of BL 32 (Second Foramen)) and BL 54 (Order’s Limit) (on the level of BL-34), both 3 cun lateral to the midline. Also on the level of BL-34 is Ex-B-11 (3.5 cun lateral to the midline).

According to some authors, meeting point with GB (Gallbladder Meridian – Zu Shao Yang). Clinically, BL 32 (Second Foramen) is the most commonly used point owing to its widest range of indications. Electro-acupuncture at BL 32 (Second Foramen) is useful for alleviating pain during labour. Moxibustion of the baliao is indicated for difficult urination or defaecation due to Kidney deficiency in elderly people. 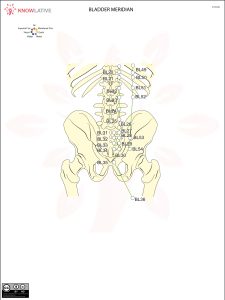