The brain case contains and protects the brain. The interior space that is almost completely occupied by the brain is called the cranial cavity. This cavity is bounded superiorly by the rounded top of the skull, which is called the calvaria (skullcap), and the lateral and posterior sides of the skull. The bones that form the top and sides of the brain case are usually referred to as the “flat” bones of the skull.
The floor of the brain case is referred to as the base of the skull. This is a complex area that varies in depth and has numerous openings for the passage of cranial nerves, blood vessels, and the spinal cord. Inside the skull, the base is subdivided into three large spaces, the [[CranialFossae]] (fossa = “trench or ditch”). From anterior to posterior, the fossae increase in depth. The shape and depth of each fossa corresponds to the shape and size of the brain region that each houses. 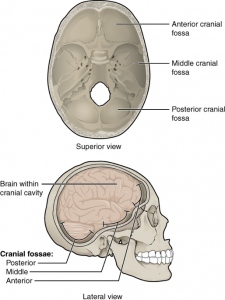