Achilles tendinitis is an overuse injury of the Achilles tendon, the band of tissue that connects calf muscles (Soleus and Gastrocnemius) at the back of the lower leg to the heel bone (Tuberosity of Calcaneus). Achilles tendinitis most commonly occurs in runners who have suddenly increased the intensity or duration of their runs. It’s also common in middle-aged people who play sports, such as tennis or basketball, only at the weekend.

A 35-year-old male, office worker, playing golf twice a week, asked my advice for a bilateral Achilles tendinitis. He came to visit me after another orthopedic consultation and a cycle of physic therapy (laser and manual therapy) with no result. Symptoms had started 1 year before without any significant change in his lifestyle, diet or other relevant change or experience. He had pain during movement and after physical activities. His tendons were painful and sore but not swollen. This is usually a sign that the tendon can compensate for the functional request from a mechanical point of view. In the worst situations, after 1 year of symptoms, the tendon can appear swollen and larger than normal.

I usually test for Hydration – Dehydration, and Switching and a few other basic pre-tests before starting to assess the issue and I did not notice any particular imbalance. Since I had no idea as to the possible cause of his problem, I decided to activate the Achilles tendons asking the client to walk on his heels and then his tiptoes. He had pain but could do both exercises. Asking him to lay down, I tested all muscles that move the Ankle – Tibiotarsal Joint – Talocrural Joint (You can see all muscles flexing and extending the joint and their muscle tests directly in Knowlative starting from the #Joint Ankle). [NOTE! During a consultation, you can easily refer to the Knowlative app to follow the simple instructions for both testings, and finding all the linking muscles, bones and joints!] I did not find any imbalance. I started to wonder what was going on, so I decided to test the Classical 42 Muscles. I found just 4 muscles of the upper arms Hypotonic Muscle and Balanced them with their Reflexes (not yet in Knowlative but almost ready… you will find them in a few weeks). A lot of testing so far, but I was not happy with the information I gathered. I asked him to activate again the muscles moving the ankle and tested the Reactive Mode with an Indicator Change. I then used the Reactive Muscles technique to assess possible reactivities in the ankle muscles. I found that both Tibialis Anterior muscles were inhibiting all the 8 muscles that dorsally flex the ankle but the Plantaris (you find them as extensors of the Ankle – Tibiotarsal Joint – Talocrural Joint in K) and so I balanced them. I rechecked with the Reactive Mode to see if I missed some reactivity or if, as often happens, other muscles far from the symptomatic area were present and the Mode was no longer active. I asked him to stand up and try to walk and jump again to see if something had changed. To his astonishment (and mine, too), all the pain was gone. He did not feel any discomfort in his ankles and foot.

He called me 2 weeks after and confirmed that he still did not have any symptoms. Approximately 1 year later I saw him for a different problem and his Achilles’ tendons were still ok.
Results are not always so fast and “magic” but this is one of the main reasons why I love Muscle Response Testing (MRT)! 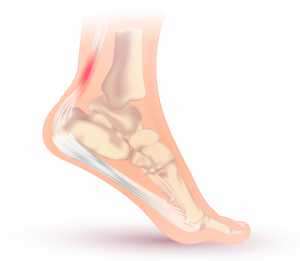