The complement system is a biochemical cascade of the immune system that helps, or “complements”, the ability of antibodies to clear pathogens or mark them for destruction by other cells. The cascade is composed of many plasma proteins, synthesized in the liver, primarily by hepatocytes. The proteins work together to:

Elements of the complement cascade can be found in many non-mammalian species including plants, birds, fish, and some species of invertebrates. 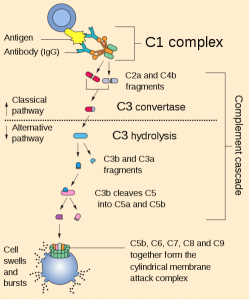