The femur, or thigh bone, is the single bone of the thigh region (Picture 1). It is the longest and strongest bone of the body, and accounts for approximately one-quarter of a person’s total height.

The distal end of the femur has medial and lateral bony expansions:

The epicondyles provide attachment for muscles and supporting ligaments of the knee. The adductor tubercle is a small bump located at the superior margin of the medial epicondyle. Posteriorly, the medial and lateral condyles are separated by a deep depression called the intercondylar fossa. Anteriorly, the smooth surfaces of the condyles join together to form a wide groove called the patellar surface, which provides for articulation with the patella bone. The combination of the medial and lateral condyles with the patellar surface gives the distal end of the femur a horseshoe (U) shape. 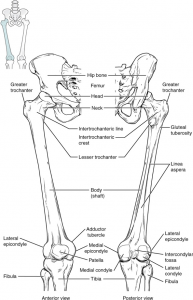