Flexion and extension are movements that take place within the sagittal plane and involve anterior or posterior movements of the body or limbs. For the vertebral column, flexion (anterior flexion) is an anterior (forward) bending of the neck or body, while extension involves a posterior-directed motion, such as straightening from a flexed position or bending backward. Lateral flexion is the bending of the neck or body toward the right or left side. These movements of the vertebral column involve both the symphysis joint formed by each intervertebral disc, as well as the plane type of synovial joint formed between the inferior articular processes of one vertebra and the superior articular processes of the next lower vertebra.
In the limbs, flexion decreases the angle between the bones (bending of the joint), while extension increases the angle and straightens the joint. For the upper limb, all anterior-going motions are flexion and all posterior-going motions are extension.
These include anterior-posterior movements of the arm at the shoulder, the forearm at the elbow, the hand at the wrist, and the fingers at the metacarpophalangeal and interphalangeal joints. For the thumb, extension moves the thumb away from the palm of the hand, within the same plane as the palm, while flexion brings the thumb back against the index finger or into the palm. These motions take place at the first carpometacarpal joint. In the lower limb, bringing the thigh forward and upward is flexion at the hip joint, while any posterior-going motion of the thigh is extension. Note that extension of the thigh beyond the anatomical (standing) position is greatly limited by the ligaments that support the hip joint. Knee flexion is the bending of the knee to bring the foot toward the posterior thigh, and extension is the straightening of the knee. Flexion and extension movements are seen at the hinge, condyloid, saddle, and ball-and-socket joints of the limbs (Picture 1 a-d).
Hyperextension is the abnormal or excessive extension of a joint beyond its normal range of motion, thus resulting in injury. Similarly, hyperflexion is excessive flexion at a joint. Hyperextension injuries are common at hinge joints such as the knee or elbow. In cases of “whiplash” in which the head is suddenly moved backward and then forward, a patient may experience both hyperextension and hyperflexion of the cervical region. 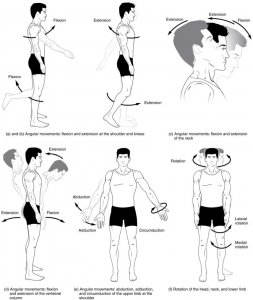