The epicranial aponeurosis (aponeurosis epicranialis, galea aponeurotica) is an aponeurosis (a tough layer of dense fibrous tissue) which covers the upper part of the cranium in humans and various other animals. In humans, it is attached in the interval between its union with the occipitofrontalis muscle, to the external occipital protuberance and highest nuchal lines of the occipital bone; in front, it forms a short and narrow prolongation between its union with the frontalis muscle or frontal part of the occipitofrontalis muscle.
On either side the epicranial aponeurosis gives origin to the anterior and the superior auricular muscles; in this situation it loses its aponeurotic character, and is continued over the temporal fascia to the zygomatic arch as a layer of laminated areolar tissue.
It is closely connected to the integument by the firm, dense, fibro-fatty layer which forms the superficial fascia of the scalp: it is attached to the pericranium by loose cellular tissue, which allows the aponeurosis, carrying with it the integument, to move through a considerable distance. 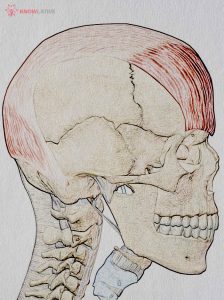