Gray’s Anatomy is an English language textbook of human anatomy originally written by Henry Gray and illustrated by Henry Vandyke Carter.  Earlier editions were called Anatomy: Descriptive and Surgical, Anatomy of the Human Bodyand Gray’s Anatomy: Descriptive and Applied, but the book’s name is commonly shortened to, and later editions are titled, Gray’s Anatomy. The book is widely regarded as an extremely influential work on the subject, and has continued to be revised and republished from its initial publication in 1858 to the present day. The latest edition of the book, the 41st, was published in September 2015. The 20th edition of this book was published in 1918 and is of public domain. You can find it here: https://www.bartleby.com/107/ 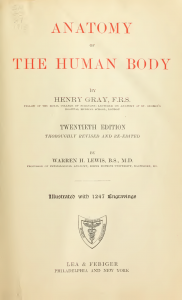 This is a part of the article you can find in Knowlative WebApp. To see the full content of the article click the link below and enter the app.
Not subscribed yet? Discover more on our WebApp.