Herd immunity (also called herd effect, community immunity, population immunity, or social immunity) is a form of indirect protection from infectious disease that occurs when a large percentage of a population has become immune to an infection, whether through previous infections or vaccination, thereby providing a measure of protection for individuals who are not immune. In a population in which a large proportion of individuals possess immunity, such people being unlikely to contribute to disease transmission, chains of infection are more likely to be disrupted, which either stops or slows the spread of disease. The greater the proportion of immune individuals in a community, the smaller the probability that non-immune individuals will come into contact with an infectious individual, helping to shield non-immune individuals from infection.

Individuals can become immune by recovering from an earlier infection or through vaccination. Some individuals cannot become immune due to medical reasons, such as an immunodeficiency or immunosuppression, and for this group herd immunity is a crucial method of protection. Once a certain threshold has been reached, herd immunity gradually eliminates a disease from a population. This elimination, if achieved worldwide, may result in the permanent reduction in the number of infections to zero, called eradication. Herd immunity created via vaccination contributed to the eventual eradication of smallpox in 1977 and has contributed to the reduction of the frequencies of other diseases. Herd immunity does not apply to all diseases, just those that are contagious, meaning that they can be transmitted from one individual to another. Tetanus, for example, is infectious but not contagious, so herd immunity does not apply.

Herd immunity does not work in the same way with every contagious disease. The amount of immunized population needed to have a protective effect on the non-immunized members varies largely from a disease to another due to its features. 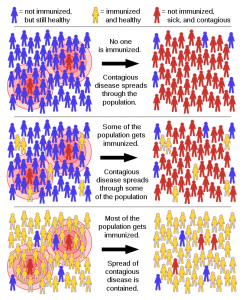