The hip bone, or coxal bone, forms the pelvic girdle portion of the pelvis. The paired hip bones are the large, curved bones that form the lateral and anterior aspects of the pelvis. Each adult hip bone is formed by three separate bones that fuse together during the late teenage years. These bony components are the ilium, ischium, and pubis (Picture 1).
These names are retained and used to define the three regions of the adult hip bone.
The ilium is the fan-like, superior region that forms the largest part of the hip bone. It is firmly united to the sacrum at the largely immobile sacroiliac joint (Picture 2). The ischium forms the posteroinferior region of each hip bone. It supports the body when sitting. The pubis forms the anterior portion of the hip bone. The pubis curves medially, where it joins to the pubis of the opposite hip bone at a specialized joint called the pubic symphysis. 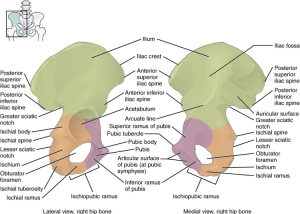