The hip joint is a multiaxial ball-and-socket joint between the head of the femur and the acetabulum of the hip bone (Picture 1). The hip carries the weight of the body and thus requires strength and stability during standing and walking. For these reasons, its range of motion is more limited than at the shoulder joint.
The acetabulum is the socket portion of the hip joint. This space is deep and has a large articulation area for the femoral head, thus giving stability and weight bearing ability to the joint. The acetabulum is further deepened by the acetabular labrum, a fibrocartilage lip attached to the outer margin of the acetabulum. The surrounding articular capsule is strong, with several thickened areas forming intrinsic ligaments. These ligaments arise from the hip bone, at the margins of the acetabulum, and attach to the femur at the base of the neck. The ligaments are the iliofemoral ligament, pubofemoral ligament, and ischiofemoral ligament, all of which spiral around the head and neck of the femur. The ligaments are tightened by extension at the hip, thus pulling the head of the femur tightly into the acetabulum when in the upright, standing position. Very little additional extension of the thigh is permitted beyond this vertical position. These ligaments thus stabilize the hip joint and allow you to maintain an upright standing position with only minimal muscle contraction. Inside of the articular capsule, the ligament of the head of the femur (ligamentum teres) spans between the acetabulum and femoral head. This intracapsular ligament is normally slack and does not provide any significant joint support, but it does provide a pathway for an important artery that supplies the head of the femur.

The hip is prone to osteoarthritis, and thus was the first joint for which a replacement prosthesis was developed. A common injury in elderly individuals, particularly those with weakened bones due to osteoporosis, is a “broken hip,” which is actually a fracture of the femoral neck. This may result from a fall, or it may cause the fall. This can happen as one lower limb is taking a step and all of the body weight is placed on the other limb, causing the femoral neck to break and producing a fall. Any accompanying disruption of the blood supply to the femoral neck or head can lead to necrosis of these areas, resulting in bone and cartilage death. Femoral fractures usually require surgical treatment, after which the patient will need mobility assistance for a prolonged period, either from family members or in a long-term care facility. Consequentially, the associated health care costs of “broken hips” are substantial. In addition, hip fractures are associated with increased rates of morbidity (incidences of disease) and mortality (death). Surgery for a hip fracture followed by prolonged bed rest may lead to life-threatening complications, including pneumonia, infection of pressure ulcers (bedsores), and thrombophlebitis (deep vein thrombosis; blood clot formation) that can result in a pulmonary embolism (blood clot within the lung).

Muscles in relation to the hip

The muscles in relation with the joint are, in front, the Psoas major and Iliacus, separated from the capsule by a bursa; above, the reflected head of the Rectus femoris and Glutæus minimus, the latter being closely adherent to the capsule; medially, the Obturator externus and Pectineus; behind, the Piriformis, Gemellus superior, Obturator internus, Gemellus inferior, Obturator externus, and Quadratus femoris.

The movements of the hip are very extensive, and consist of flexion, extension, adduction, abduction, circumduction, and rotation.
The length of the neck of the femur and its inclinations to the body of the bone have the effect of converting the angular movements of flexion, extension, adduction, and abduction partially into rotatory movements in the joint. Thus when the thigh is flexed or extended, the head of the femur, on account of the medial inclination of the neck, rotates within the acetabulum with only a slight amount of gliding to and fro. The forward slope of the neck similarly affects the movements of adduction and abduction. Conversely rotation of the thigh which is permitted by the upward inclination of the neck, is not a simple rotation of the head of the femur in the acetabulum, but is accompanied by a certain amount of gliding.
The hip-joint presents a very striking contrast to the shoulder-joint in the much more complete mechanical arrangements for its security and for the limitation of its movements. In the shoulder the head of the humerus is not adapted at all in size to the glenoid cavity, and is hardly restrained in any of its ordinary movements by the capsule. In the hip-joint, on the contrary, the head of the femur is closely fitted to the acetabulum for an area extending over nearly half a sphere, and at the margin of the bony cup it is still more closely embraced by the glenoidal labrum, so that the head of the femur is held in its place by that ligament even when the fibers of the capsule have been quite divided. The iliofemoral ligament is the strongest of all the ligaments in the body, and is put on the stretch by any attempt to extend the femur beyond a straight line with the trunk. That is to say, this ligament is the chief agent in maintaining the erect position without muscular fatigue; for a vertical line passing through the center of gravity of the trunk falls behind the centers of rotation in the hip-joints, and therefore the pelvis tends to fall backward, but is prevented by the tension of the iliofemoral ligaments.
The security of the joint may be provided for also by the two bones being directly united through the ligamentum teres; but it is doubtful whether this ligament has much influence upon the mechanism of the joint. When the knee is flexed, flexion of the hip-joint is arrested by the soft parts of the thigh and abdomen being brought into contact, and when the knee is extended, by the action of the hamstring muscles; extension is checked by the tension of the iliofemoral ligament; adduction by the thighs coming into contact; adduction with flexion by the lateral band of the iliofemoral ligament and the lateral part of the capsule; abduction by the medial band of the iliofemoral ligament and the pubocapsular ligament; rotation outward by the lateral band of the iliofemoral ligament; and rotation inward by the ischiocapsular ligament and the hinder part of the capsule. 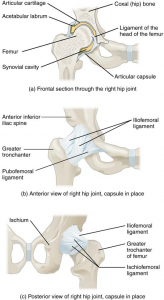