Inflammation is one of the first responses of the immune system to infection or irritation.

Inflammation is stimulated by chemical factors released by injured cells and serves to establish a physical barrier against the spread of infection, and to promote healing of any damaged tissue following the clearance of pathogens.

The process of acute inflammation is initiated by cells already present in all tissues, mainly resident macrophages, dendritic cells, histiocytes, Kupffer cells, and mast cells. These cells present receptors contained on the surface or within the cell, named pattern recognition receptors (PRRs), which recognize molecules that are broadly shared by pathogens but distinguishable from host molecules, collectively referred to as pathogen-associated molecular patterns (PAMPs). At the onset of an infection, burn, or other injuries, these cells undergo activation (one of their PRRs recognizes a PAMP) and release inflammatory mediators responsible for the clinical signs of inflammation.

Chemical factors produced during inflammation (histamine, bradykinin, serotonin, leukotrienes, and prostaglandins) sensitize pain receptors, cause local vasodilation of the blood vessels, and attract phagocytes, especially neutrophils. Neutrophils then trigger other parts of the immune system by releasing factors that summon additional leukocytes and lymphocytes. Cytokines produced by macrophages and other cells of the innate immune system mediate the inflammatory response. These cytokines include TNF, HMGB1, and IL-1.

The inflammatory response is characterized by the following symptoms: 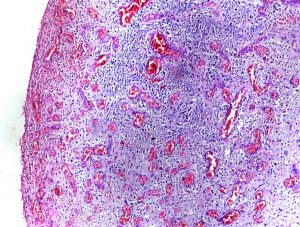