The muscles of the back can be divided into three groups – superficial, intermediate and intrinsic:

The deep muscles of the back are well-developed, and collectively extend from the sacrum to the base of the skull. They are associated with the movements of the vertebral column, and the control of posture. The muscles themselves are covered by deep fascia, which plays a key role in their organization.
Anatomically, the deep back (intrinsic) muscles can be divided into three layers:

The superficial muscles are also known as the Spinotransversales. There are two muscles in this group: Splenius Capitis and Splenius Cervicis. They are both associated with movements of the head and neck. They are located on the posterolateral aspect of the neck, covering the deeper neck muscles.

There are three intermediate intrinsic back muscles: the Iliocostalis, Longissimus and Spinalis. Together these muscles form a column, known as the Sacrospinalis – Erector Spinae. The Sacrospinalis – Erector Spinae is situated posterolaterally to spinal column, between the vertebral spinous processes and the costal angle of the ribs. All three muscles have a common tendinous origin, which arises from: Lumbar and lower thoracic vertebrae, Sacrum, Posterior aspect of iliac crest, Sacroiliac and supraspinous ligaments.

The deep intrinsic muscles are located underneath the erector spinae. They are a group of short muscles, associated with the transverse and spinous processes of the vertebral column. 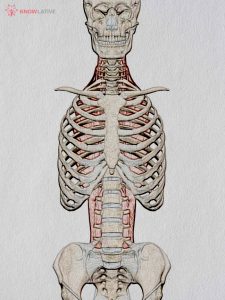