The knee joint is the largest joint of the body (Picture 1). It actually consists of three articulations:

All of these articulations are enclosed within a single articular capsule.
The knee functions as a hinge joint, allowing flexion and extension of the leg. This action is generated by both rolling and gliding motions of the femur on the tibia. In addition, some rotation of the leg is available when the knee is flexed, but not when extended. The knee is well constructed for weight bearing in its extended position, but is vulnerable to injuries associated with hyperextension, twisting, or blows to the medial or lateral side of the joint, particularly while weight bearing.
When the knee is flexed it can also rotate (lateral and medial rotation). If the knee is not flexed, the medial/lateral rotation of the leg occurs at the hip joint.

The medial and lateral tibiofemoral joints are the articulations between the rounded condyles of the femur and the relatively flat condyles of the tibia. During flexion and extension motions, the condyles of the femur both roll and glide over the surfaces of the tibia. The rolling action produces flexion or extension, while the gliding action serves to maintain the femoral condyles centered over the tibial condyles, thus ensuring maximal bony, weight-bearing support for the femur in all knee positions. As the knee comes into full extension, the femur undergoes a slight medial rotation in relation to tibia. The rotation results because the lateral condyle of the femur is slightly smaller than the medial condyle. Thus, the lateral condyle finishes its rolling motion first, followed by the medial condyle. The resulting small medial rotation of the femur serves to “lock” the knee into its fully extended and most stable position. Flexion of the knee is initiated by a slight lateral rotation of the femur on the tibia, which “unlocks” the knee. This lateral rotation motion is produced by the popliteus muscle of the posterior leg.
Located between the articulating surfaces of the femur and tibia are two articular discs, the medial meniscus and lateral meniscus (see Picture 1 b). Each is a C-shaped fibrocartilage structure that is thin along its inside margin and thick along the outer margin. They are attached to their tibial condyles, but do not attach to the femur. While both menisci are free to move during knee motions, the medial meniscus shows less movement because it is anchored at its outer margin to the articular capsule and tibial collateral ligament. The menisci provide padding between the bones and help to fill the gap between the round femoral condyles and flattened tibial condyles. Some areas of each meniscus lack an arterial blood supply and thus these areas heal poorly if damaged.
The knee joint has multiple ligaments that provide support, particularly in the extended position (see Picture 1 c). Outside of the articular capsule, located at the sides of the knee, are two extrinsic ligaments:

The articular capsule of the posterior knee is thickened by intrinsic ligaments that help to resist knee hyperextension.
Inside the knee are two intracapsular ligaments:

Movements of the knee: a complex mechanism for a stunning result

The movement from full flexion to full extension may therefore be described in three phases:

The complete movement of flexion is the converse of that described above, and is therefore preceded by an external rotation of the femur which unlocks the extended joint.
The axes around which the movements of flexion and extension take place are not precisely at right angles to either bone; in flexion, the femur and tibia are in the same plane, but in extension the one bone forms an angle, opening lateralward with the other.
In addition to the rotatory movements associated with the completion of extension and the initiation of flexion, rotation inward or outward can be effected when the joint is partially flexed; these movements take place mainly between the tibia and the menisci, and are freest when the leg is bent at right angles with the thigh. 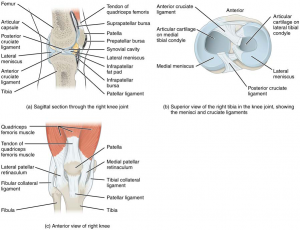