NeuroVascular reflexes (NV) are an important tool for balancing muscles.

They were first described by a chiropractor named Terence Bennet in the early 1930s. Terence developed a technique that related the blood flow in specific organs or glands of the body to the stimulation of specific points on the head and the front of the body using X-rays.

In the mid-1960s, Dr. George Goodheart discovered that they could be used to balance unlocking muscles.

Among different authors there are sometimes differences in the association between NV reflexes and muscles. I tried to link every NV reflex with every muscle that is at least referred as linked by an author in the books cited as source of this group. 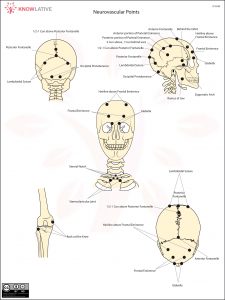