The pelvis consists of four bones: the right and left hip bones, the sacrum, and the coccyx (Picture 1). The pelvis has several important functions:

When standing in the anatomical position, the pelvis is tilted anteriorly. In this position, the anterior superior iliac spines and the pubic tubercles lie in the same vertical plane, and the anterior (internal) surface of the sacrum faces forward and downward.   The three areas of each hip bone, the ilium, pubis, and ischium, converge centrally to form a deep, cup-shaped cavity called the acetabulum. This is located on the lateral side of the hip bone and is part of the hip joint. The large opening in the anteroinferior hip bone between the ischium and pubis is the obturator foramen. This space is largely filled in by a layer of connective tissue and serves for the attachment of muscles on both its internal and external surfaces.   Several ligaments unite the bones of the pelvis (Picture 2). The largely immobile sacroiliac joint is supported by a pair of strong ligaments that are attached between the sacrum and ilium portions of the hip bone. These are the anterior sacroiliac ligament on the anterior side of the joint and the posterior sacroiliac ligament on the posterior side. Also spanning the sacrum and hip bone are two additional ligaments. The sacrospinous ligament runs from the sacrum to the ischial spine, and the sacrotuberous ligament runs from the sacrum to the ischial tuberosity. These ligaments help to support and immobilize the sacrum as it carries the weight of the body. The sacrospinous and sacrotuberous ligaments also help to define two openings on the posterolateral sides of the pelvis through which muscles, nerves, and blood vessels for the lower limb exit. The superior opening is the greater sciatic foramen. This large opening is formed by the greater sciatic notch of the hip bone, the sacrum, and the sacrospinous ligament. The smaller, more inferior lesser sciatic foramen is formed by the lesser sciatic notch of the hip bone, together with the sacrospinous and sacrotuberous ligaments.   The space enclosed by the bony pelvis is divided into two regions (Picture 3):

The inferior limit of the lesser pelvic cavity is called the pelvic outlet. This large opening is defined by the inferior margin of the pubic symphysis anteriorly, and the ischiopubic ramus, the ischial tuberosity, the sacrotuberous ligament, and the inferior tip of the coccyx posteriorly. Because of the anterior tilt of the pelvis, the lesser pelvis is also angled, giving it an anterosuperior (pelvic inlet) to posteroinferior (pelvic outlet) orientation.

Comparison of the Female and Male Pelvis

The differences between the adult female and male pelvis relate to function and body size. In general, the bones of the male pelvis are thicker and heavier, adapted for support of the male’s heavier physical build and stronger muscles. The greater sciatic notch of the male hip bone is narrower and deeper than the broader notch of females. Because the female pelvis is adapted for childbirth, it is wider than the male pelvis, as evidenced by the distance between the anterior superior iliac spines (Picture 3). The ischial tuberosities of females are also farther apart, which increases the size of the pelvic outlet. Because of this increased pelvic width, the subpubic angle is larger in females (greater than 80 degrees) than it is in males (less than 70 degrees). The female sacrum is wider, shorter, and less curved, and the sacral promontory projects less into the pelvic cavity, thus giving the female pelvic inlet (pelvic brim) a more rounded or oval shape compared to males. The lesser pelvic cavity of females is also wider and more shallow than the narrower, deeper, and tapering lesser pelvis of males. Because of the obvious differences between female and male hip bones, this is the one bone of the body that allows for the most accurate sex determination. Picture 4 (Table 8.1 from Anatomy and Phisiology – OpenStax CNX) provides an overview of the general differences between the female and male pelvis. 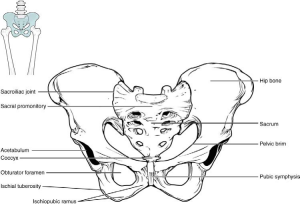