The fingers and thumb contain 14 bones, each of which is called a phalanx bone (plural = phalanges), named after the ancient Greek phalanx (a rectangular block of soldiers).
The thumb (pollex) is digit number 1 and has two phalanges, a proximal phalanx, and a distal phalanx bone (Picture 1).
Digits 2 (index finger) through 5 (little finger) have three phalanges each, called the proximal, middle, and distal phalanx bones. An interphalangeal joint is one of the articulations between adjacent phalanges of the digits (Picture 2).

Each consists of a body and two extremities:

The ungual phalanges are convex on their dorsal and flat on their volar surfaces; they are recognized by their small size, and by a roughened, elevated surface of a horseshoe form on the vo 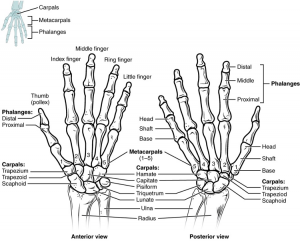