At a plane joint (gliding joint), the articulating surfaces of the bones are flat or slightly curved and of approximately the same size, which allows the bones to slide against each other (Picture 1 d). The motion at this type of joint is usually small and tightly constrained by surrounding ligaments. Based only on their shape, plane joints can allow multiple movements, including rotation. Thus plane joints can be functionally classified as a multiaxial joint. However, not all of these movements are available to every plane joint due to limitations placed on it by ligaments or neighboring bones. Thus, depending upon the specific joint of the body, a plane joint may exhibit only a single type of movement or several movements. Plane joints are found between the carpal bones (intercarpal joints) of the wrist or tarsal bones (intertarsal joints) of the foot, between the clavicle and acromion of the scapula (acromioclavicular joint), and between the superior and inferior articular processes of adjacent vertebrae (zygapophysial joints). 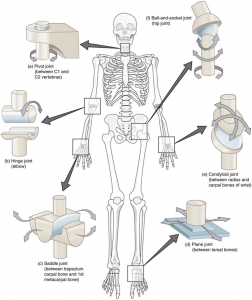