In Chinese Medicine, seasons are linked to the 5 Elements – Wu Xing. Earth Element (土 tǔ) features can slightly change according to the model you are following. In the evolution of the [[5ElementTheory]], the Earth Element (土 tǔ), that was at the beginning the central element, the pivot that allowed all other to transform into each-other, was moved on the side of other 4 Elements between Fire Element (火 huǒ) and Metal Element (金 jīn).


Seasons in Knowlative
In Knowlative you can see the current season in the top right corner of the screen, just under the top bar. We choose to follow the Classical Chinese Medicine Model because it is more related with the astronomical phases of the year and better represents the actual “Energy” manifesting in that period of the year.
The 5 season model (TCM) is easier to use according to the 5 element model but not always accurate.
It is important to notice that the solstices and equinoxes represent for the Chinese Medicine not the beginning of each season, but the apex of its manifestation. For this reason, in Knowlative every season starts 36,5 days before the related astronomical solstice/equinox and lasts 73 days. The in-between periods (73,25 days divided in 4 different periods) are the Earth seasons. 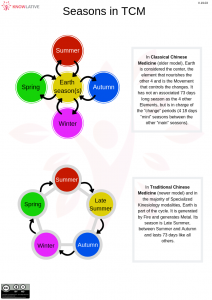