Small babies, the mentally and physically handicapped, frail old people and animals can all be tested using surrogate testing. The practitioner will muscle test someone (the surrogate) who is holding or touching the client. It is commonly thought to work best if the surrogate and the subject (baby, animal, handicapped person, etc.) have a relationship, e.g. a mother being a surrogate for her child, but it can also work where there is no pre-existing relationship.
Once I was giving a talk on kinesiology and the question of testing babies came up. I was talking about allergies at the time, so I tested one lady who showed she was reacting to chocolate. Then I tested someone else who was not. Next I got them to hold hands and used the second lady as a surrogate. Now muscle testing her showed up the chocolate reaction of her friend. This produced a lot of interest and eventually we had twenty people holding hands with the lady with the chocolate reaction at one end. I tested the person at the other end, who did not have a chocolate allergy herself, and once again the chocolate problem showed through. This was really a party trick, as you only need one person to act as a surrogate to test another person or animal, but nevertheless it clearly and dramatically demonstrates the phenomenon of surrogate testing.
You can also use surrogate testing to test muscles that cannot be tested directly (Surrogate Muscle Testing). 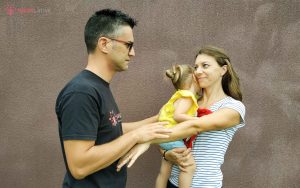