Synovial joints are characterized by the presence of a joint cavity (Picture 1). The walls of this space are formed by the articular capsule, a fibrous connective tissue structure that is attached to each bone just outside the area of the bone’s articulating surface. The bones of the joint articulate with each other within the joint cavity.
Friction between the bones at a synovial joint is prevented by the presence of the articular cartilage, a thin layer of hyaline cartilage that covers the entire articulating surface of each bone. However, unlike at a cartilaginous joint, the articular cartilages of each bone are not continuous with each other. Instead, the articular cartilage acts like a Teflon® coating over the bone surface, allowing the articulating bones to move smoothly against each other without damaging the underlying bone tissue. Lining the inner surface of the articular capsule is a thin synovial membrane. The cells of this membrane secrete synovial fluid (synovia = “a thick fluid”), a thick, slimy fluid that provides lubrication to further reduce friction between the bones of the joint. This fluid also provides nourishment to the articular cartilage, which does not contain blood vessels. The ability of the bones to move smoothly against each other within the joint cavity, and the freedom of joint movement this provides, means that each synovial joint is functionally classified as a [[diarthrosis]].
Outside of their articulating surfaces, the bones are connected together by ligaments, which are strong bands of fibrous connective tissue. These strengthen and support the joint by anchoring the bones together and preventing their separation. Ligaments allow for normal movements at a joint, but limit the range of these motions, thus preventing excessive or abnormal joint movements. Ligaments are classified based on their relationship to the fibrous articular capsule. An extrinsic ligament is located outside of the articular capsule, an intrinsic ligament is fused to or incorporated into the wall of the articular capsule, and an intracapsular ligament is located inside of the articular capsule.
At many synovial joints, additional support is provided by the muscles and their tendons that act across the joint. A tendon is the dense connective tissue structure that attaches a muscle to bone. As forces acting on a joint increase, the body will automatically increase the overall strength of contraction of the muscles crossing that joint, thus allowing the muscle and its tendon to serve as a “dynamic ligament” to resist forces and support the joint. This type of indirect support by muscles is very important at the shoulder joint, for example, where the ligaments are relatively weak.

A few synovial joints of the body have a fibrocartilage structure located between the articulating bones. This is called an articular disc, which is generally small and oval-shaped, or a meniscus, which is larger and C-shaped. These structures can serve several functions, depending on the specific joint. In some places, an articular disc may act to strongly unite the bones of the joint to each other. Examples of this include the articular discs found at the sternoclavicular joint or between the distal ends of the radius and ulna bones. At other synovial joints, the disc can provide shock absorption and cushioning between the bones, which is the function of each meniscus within the knee joint. Finally, an articular disc can serve to smooth the movements between the articulating bones, as seen at the temporomandibular joint. Some synovial joints also have a fat pad, which can serve as a cushion between the bones.
Additional structures located outside of a synovial joint serve to prevent friction between the bones of the joint and the overlying muscle tendons or skin. A bursa (plural = bursae) is a thin connective tissue sac filled with lubricating liquid. They are located in regions where skin, ligaments, muscles, or muscle tendons can rub against each other, usually near a body joint (Picture 2). Bursae reduce friction by separating the adjacent structures, preventing them from rubbing directly against each other. Bursae are classified by their location. A subcutaneous bursa is located between the skin and an underlying bone. It allows skin to move smoothly over the bone. Examples include the prepatellar bursa located over the kneecap and the olecranon bursa at the tip of the elbow. A submuscular bursa is found between a muscle and an underlying bone, or between adjacent muscles. These prevent rubbing of the muscle during movements. A large submuscular bursa, the trochanteric bursa, is found at the lateral hip, between the greater trochanter of the femur and the overlying gluteus maximus muscle. A subtendinous bursa is found between a tendon and a bone. Examples include the subacromial bursa that protects the tendon of shoulder muscle as it passes under the acromion of the scapula, and the suprapatellar bursa that separates the tendon of the large anterior thigh muscle from the distal femur just above the knee.
A tendon sheath is similar in structure to a bursa, but smaller. It is a connective tissue sac that surrounds a muscle tendon at places where the tendon crosses a joint. It contains a lubricating fluid that allows for smooth motions of the tendon during muscle contraction and joint movements.

Types of Synovial Joints
Synovial joints are subdivided based on the shapes of the articulating surfaces of the bones that form each joint. The six types of synovial joints are pivot, hinge, condyloid, saddle, plane, and ball-and socket-joints (Picture 3). 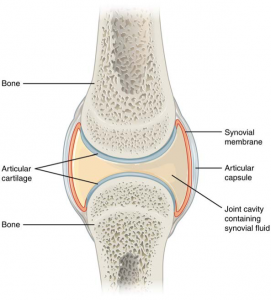