A T cell is a type of lymphocyte, which develops in the thymus gland (hence the name) and plays a central role in the immune response. T cells can be distinguished from other lymphocytes by the presence of a T-cell receptor on the cell surface. These immune cells originate as precursor cells, derived from bone marrow, and develop into several distinct types of T cells once they have migrated to the thymus gland. T cell differentiation continues even after they have left the thymus.

Groups of specific, differentiated T cells have an important role in controlling and shaping the immune response by providing a variety of immune-related functions.

One of these functions is immune-mediated cell death, and it is carried out by T cells in several ways: 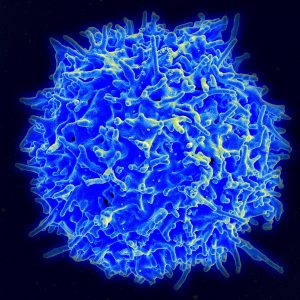