The bones of the foot are divided into three groups. The posterior half of the foot is formed by seven tarsal bones.

The navicular and lateral cuneiform bones also articulate with the medial side of the cuboid bone. 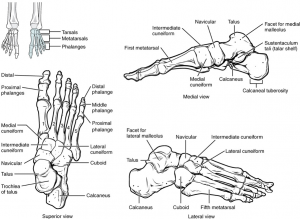