The Eight Extraordinary Meridians represent the body’s deepest level of energetic structuring.
These meridians are the first to form after conception and are carriers of Jing and Yuan Qi: our hereditary energies (that correspond to our genetic inheritance).
They function as deep reservoirs from which the 12 Main/Principal/Primary Meridians can be replenished, and into which the latter can drain their excesses.
They are not the emanation of a particular organ and are not connected to any organ or viscera (Zhang-Fu). They have, however, a relationship with the Extraordinary Organs, such as the Uterus, Medulla, Bones, Brain, Vessles, and Gall Bladder.
They are directly connected to the Neuro-Immune System, the Endocrine System and the Structural System.
They control the functions of the reproductive organs. Because they control the Hereditary Energy activities, they are responsible for the ability to conceive and sexual potency. They also control all phases of pregnancy, foetal development, and the function of sexual organs (including menstrual cycle).
The specific Eight Extraordinary Meridians are:

The Eight Extras are typically used in pairs:

Of these eight meridians, only the Ren Mai (Central Vessel) and the Du Mai (Governing Vessel) have their own acupuncture points, the other ones use the points of the 12 Primary Meridians.
Each Extraordinary Meridian has a special point, called Key Point, that is used to open and activate that Meridian. The Key Points are:

Other names for these Eight Extraordinary Meridians include: 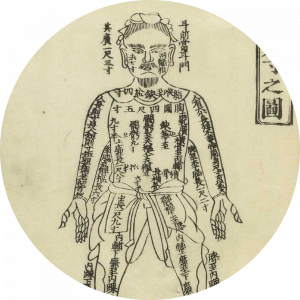