The cranium (skull) is the skeletal structure of the head that supports the face and protects the brain. It is subdivided in 2 parts (see picture 1):

In the adult, the skull consists of 22 individual bones, 21 of which have only small movements and united into a single unit. The 22nd bone is the [[Mandible]] (lower jaw).

The anterior skull (picture 2) consists of the facial bones and provides the bony support for the eyes and structures of the face. This view of the skull is dominated by the openings of the orbits and the nasal cavity. Also seen are the upper and lower jaws, with their respective teeth.
[[Theorbit]] is the bony socket that houses the eyeball and muscles that move the eyeball or open the upper eyelid. The upper margin of the anterior orbit is the supraorbital margin. Located near the midpoint of the supraorbital margin is a small opening called the supraorbital foramen. This provides for passage of a sensory nerve to the skin of the forehead. Below the orbit is the infraorbital foramen, which is the point of emergence for a sensory nerve that supplies the anterior face below the orbit.

Lateral View of the Skull 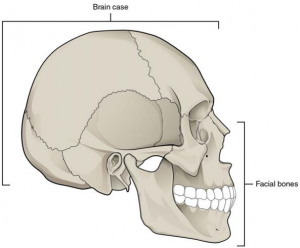