The Thoracic Cage is composed by several joints:

Movements of the Thorax

All thoracic joints participate to breathing. The respiratory movements permitted in the thorax are: inhalation and exhalation. See the Thoracic Muscles for a description of the role of all muscles.

Mechanism of the Thorax

Each rib possesses its own range and variety of movements, but the movements of all are combined in the respiratory excursions of the thorax. Each rib may be regarded as a lever the fulcrum of which is situated immediately outside the costotransverse articulation, so that when the body of the rib is elevated the neck is depressed and vice versa; from the disproportion in length of the arms of the lever a slight movement at the vertebral end of the rib is greatly magnified at the anterior extremity. The anterior ends of the ribs lie on a lower plane than the posterior; when therefore the body of the rib is elevated the anterior extremity is thrust also forward. Again, the middle of the body of the rib lies in a plane below that passing through the two extremities, so that when the body is elevated relatively to its ends it is at the same time carried outward from the median plane of the thorax. Further, each rib forms the segment of a curve which is greater than that of the rib immediately above, and therefore the elevation of a rib increases the transverse diameter of the thorax in the plane to which it is raised. The modifications of the rib movements at their vertebral ends have already been described in [[Costo-vertebral Joints]].   Further modifications result from the attachments of their anterior extremities, and it is convenient therefore to consider separately the movements of the ribs of the three groups:

(Picture 2) The first rib differs from the others of this group in that its attachment to the sternum is a rigid one; this is counterbalanced to some extent by the fact that its head possesses no interarticular ligament, and is therefore more movable. The first pair of ribs with the manubrium sterni move as a single piece, the anterior portion being elevated by rotatory movements at the vertebral extremities. In normal quiet respiration the movement of this arc is practically nil; when it does occur the anterior part is raised and carried forward, increasing the antero-posterior and transverse diameters of this region of the chest. The movement of the second rib is also slight in normal respiration, as its anterior extremity is fixed to the manubrium, and prevented therefore from moving upward. The sternocostal articulation, however, allows the middle of the body of the rib to be drawn up, and in this way the transverse thoracic diameter is increased. Elevation of the third, fourth, fifth, and sixth ribs raises and thrusts forward their anterior extremities, the greater part of the movement being effected by the rotation of the rib neck backward. The thrust of the anterior extremities carries forward and upward the body of the sternum, which moves on the joint between it and the manubrium, and thus the antero-posterior thoracic diameter is increased. This movement is, however, soon arrested, and the elevating force is then expended in raising the middle part of the body of the rib and everting its lower border; at the same time the costochondral angle is opened out. By these latter movements is produced a considerable increase in the transverse diameter of the thorax.

(Picture 3) The seventh rib is included with this group, as it conforms more closely to their type. While the movements of these ribs assist in enlarging the thorax for respiratory purposes, they are also concerned in increasing the upper abdominal space for viscera displaced by the action of the diaphragm. The costal cartilages articulate with one another, so that each pushes up that above it, the final thrust being directed to pushing forward and upward the lower end of the body of the sternum. The amount of elevation of the anterior extremities is limited on account of the very slight rotation of the rib neck. Elevation of the shaft is accompanied by an outward and backward movement; the outward movement everts the anterior end of the rib and opens up the subcostal angle, while the backward movement pulls back the anterior extremity and counteracts the forward thrust due to its elevation; this latter is most noticeable in the lower ribs, which are the shortest. The total result is a considerable increase in the transverse and a diminution in the median antero-posterior diameter of the upper part of the abdomen; at the same time, however, the lateral antero-posterior diameters of the abdomen are increased.

Since these ribs have free anterior extremities and only costocentral articulations with no interarticular ligaments, they are capable of slight movements in all directions. When the other ribs are elevated these are depressed and fixed to form points of action for the diaphragm. 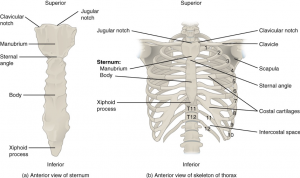