What is vitamin A and what does it do?

Vitamin A is a fat-soluble vitamin that is naturally present in many foods. Vitamin A is important for normal vision, the immune system, and reproduction. Vitamin A also helps the heart, lungs, kidneys, and other organs work properly.

There are two different types of vitamin A. The first type, preformed vitamin A, is found in meat, poultry, fish, and dairy products. The second type, provitaminA, is found in fruits, vegetables, and other plant-based products. The most common type of provitamin A in foods and dietary supplements is beta-carotene.

How much vitamin A do I need?

The amount of vitamin A you need depends on your age and sex. Average daily recommended amounts are listed below in micrograms (mcg) of retinol activity equivalents (RAE).

What foods provide vitamin A?

Vitamin A is found naturally in many foods and is added to some foods, such as milk and cereal. You can get recommended amounts of vitamin A by eating a variety of foods, including the following:

What kinds of vitamin A dietary supplements are available?

Am I getting enough vitamin A?

Most people in the United States get enough vitamin A from the foods they eat, and vitamin A deficiency is rare. However, certain groups of people are more likely than others to have trouble getting enough vitamin A:

What happens if I don’t get enough vitamin A?

Vitamin A deficiency is rare in the United States, although it is common in many developing countries. The most common symptom of vitamin A deficiency in young children and pregnant women is an eye condition called xerophthalmia. Xerophthalmia is the inability to see in low light, and it can lead to blindness if it isn’t treated.

What are some effects of vitamin A on health?

Scientists are studying vitamin A to understand how it affects health. Here are some examples of what this research has shown.

Age-related macular degeneration (AMD), or the loss of central vision as people age, is one of the most common causes of vision loss in older people. Among people with AMD who are at high risk of developing advanced AMD, a supplement containing antioxidants, zinc, and copper with or without beta-carotene has shown promise for slowing down the rate of vision loss.

When children with vitamin A deficiency (which is rare in North America) get measles, the disease tends to be more severe. In these children, taking supplements with high doses of vitamin A can shorten the fever and diarrhea caused by measles. These supplements can also lower the risk of death in children with measles who live in developing countries where vitamin A deficiency is common.

Can vitamin A be harmful?

Yes, high intakes of some forms of vitamin A can be harmful.

Consuming high amounts of beta-carotene or other forms of provitamin A can turn the skin yellow-orange, but this condition is harmless. High intakes of beta-carotene do not cause birth defects or the other more serious effects caused by getting too much preformed vitamin A.

The daily upper limits for preformed vitamin A are listed below. These levels do not apply to people who are taking vitamin A for medical reasons under the care of a doctor. Upper limits for beta-carotene and other forms of provitamin A have not been established.

Are there any interactions with vitamin A that I should know about?

Yes, vitamin A supplements can interact or interfere with medicines you take. Here are several examples: 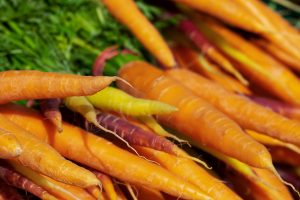