What is vitamin C and what does it do?

Vitamin C, also known as ascorbic acid, is a water-soluble nutrient found in some foods. In the body, it acts as an antioxidant, helping to protect cells from the damage caused by free radicals. Free radicals are compounds formed when our bodies convert the food we eat into energy. People are also exposed to free radicals in the environment from cigarette smoke, air pollution, and ultraviolet light from the sun.

The body also needs vitamin C to make collagen, a protein required to help wounds heal. In addition, vitamin C improves the absorption of iron from plant-based foods and helps the immune system work properly to protect the body from disease.

How much vitamin C do I need?

The amount of vitamin C you need each day depends on your age. Average daily recommended amounts for different ages are listed below in milligrams (mg).

If you smoke, add 35 mg to the above values to calculate your total daily recommended amount.

Fruits and vegetables are the best sources of vitamin C. You can get recommended amounts of vitamin C by eating a variety of foods including the following:

The vitamin C content of food may be reduced by prolonged storage and by cooking. Steaming or microwaving may lessen cooking losses. Fortunately, many of the best food sources of vitamin C, such as fruits and vegetables, are usually eaten raw.

What kinds of vitamin C dietary supplements are available?

Most multivitamins have vitamin C. Vitamin C is also available alone as a dietary supplement or in combination with other nutrients. The vitamin C in dietary supplements is usually in the form of ascorbic acid, but some supplements have other forms, such as sodium ascorbate, calcium ascorbate, other mineral ascorbates, and ascorbic acid with bioflavonoids. Research has not shown that any form of vitamin C is better than the other forms.

Am I getting enough vitamin C?

Most people in the United States get enough vitamin C from foods and beverages. However, certain groups of people are more likely than others to have trouble getting enough vitamin C:

What happens if I don’t get enough vitamin C?

Vitamin C deficiency is rare in the United States and Canada. People who get little or no vitamin C (below about 10 mg per day) for many weeks can get scurvy. Scurvy causes fatigue, inflammation of the gums, small red or purple spots on the skin, joint pain, poor wound healing, and corkscrew hairs. Additional signs of scurvy include depression as well as swollen, bleeding gums and loosening or loss of teeth. People with scurvy can also develop anemia. Scurvy is fatal if it is not treated.

What are some effects of vitamin C on health?

Scientists are studying vitamin C to understand how it affects health. Here are several examples of what this research has shown.

People with high intakes of vitamin C from fruits and vegetables might have a lower risk of getting many types of cancer, such as lung, breast, and colon cancer. However, taking vitamin C supplements, with or without other antioxidants, doesn’t seem to protect people from getting cancer.

AMD and cataracts are two of the leading causes of vision loss in older people. Researchers do not believe that vitamin C and other antioxidants affect the risk of getting AMD. However, research suggests that vitamin C combined with other nutrients might help slow AMD progression.

Can vitamin C be harmful?

Taking too much vitamin C can cause diarrhea, nausea, and stomach cramps. In people with a condition called hemochromatosis, which causes the body to store too much iron, high doses of vitamin C could worsen iron overload and damage body tissues.

The daily upper limits for vitamin C are listed below:

Are there any interactions with vitamin C that I should know about?

Vitamin C dietary supplements can interact or interfere with medicines that you take. Here are several examples: 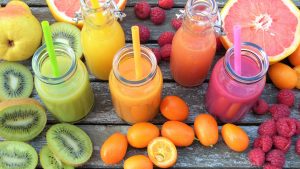