A vitamin is an organic molecule (or related set of molecules) that is an essential micronutrient that an organism needs in small quantities for the proper functioning of its metabolism. Essential nutrients cannot be synthesized in the organism, either at all or not in sufficient quantities, and therefore must be obtained through the diet. Vitamin C can be synthesized by some species but not by others; it is not a vitamin in the first instance but is in the second. The term vitamin does not include the three other groups of essential nutrients: minerals, essential fatty acids, and essential amino acids.

Most vitamins are not single molecules, but groups of related molecules called vitamers. For example, vitamin E consists of four tocopherols and four tocotrienols.

Vitamins have diverse biochemical functions. Vitamin A acts as a regulator of cell and tissue growth and differentiation. Vitamin D provides a hormone-like function, regulating mineral metabolism for bones and other organs. The B complex vitamins function as enzyme cofactors (coenzymes) or the precursors for them. Vitamins C and E function as antioxidants. Both deficient and excess intake of a vitamin can potentially cause clinically significant illness, although excess intake of water-soluble vitamins is less likely to do so.

Before 1935, the only source of vitamins was from food. If intake of vitamins was lacking, the result was vitamin deficiency and consequent deficiency diseases. Then, commercially produced tablets of yeast-extract vitamin B complex and semi-synthetic vitamin C became available. This was followed in the 1950s by the mass production and marketing of vitamin supplements, including multivitamins, to prevent vitamin deficiencies in the general population. Governments mandated addition of vitamins to staple foods such as flour or milk, referred to as food fortification, to prevent deficiencies. Recommendations for folic acid supplementation during pregnancy reduced risk of infant neural tube defects.

Vitamins are classified as either water-soluble or fat-soluble. In humans there are 13 vitamins:

Each vitamin is typically used in multiple reactions, and therefore most have multiple functions.

For the most part, vitamins are obtained from the diet, but some are acquired by other means: for example, microorganisms in the gut flora produce vitamin K and biotin; and one form of vitamin D is synthesized in skin cells when they are exposed to a certain wavelength of ultraviolet light present in sunlight. Humans can produce some vitamins from precursors they consume. For example, vitamin A is synthesized from beta carotene; and niacin is synthesized from the amino acid tryptophan. The Food Fortification Initiative lists countries which have mandatory fortification programs for vitamins folic acid, niacin, vitamin A and vitamins B1, B2 and B12.

The body’s stores for different vitamins vary widely; vitamins A, D, and B12 are stored in significant amounts, mainly in the liver, and an adult’s diet may be deficient in vitamins A and D for many months and B12 in some cases for years, before developing a deficiency condition. However, vitamin B3 (niacin and niacinamide) is not stored in significant amounts, so stores may last only a couple of weeks. For vitamin C, the first symptoms of scurvy in experimental studies of complete vitamin C deprivation in humans have varied widely, from a month to more than six months, depending on previous dietary history that determined body stores.

Deficiencies of vitamins are classified as either primary or secondary. A primary deficiency occurs when an organism does not get enough of the vitamin in its food. A secondary deficiency may be due to an underlying disorder that prevents or limits the absorption or use of the vitamin, due to a “lifestyle factor”, such as smoking, excessive alcohol consumption, or the use of medications that interfere with the absorption or use of the vitamin. People who eat a varied diet are unlikely to develop a severe primary vitamin deficiency, but may be consuming less than the recommended amounts; a national food and supplement survey conducted in the US over 2003-2006 reported that over 90% of individuals who did not consume vitamin supplements were found to have inadequate levels of some of the essential vitamins, notably vitamins D and E.

Well-researched human vitamin deficiencies involve thiamine (beriberi), niacin (pellagra), vitamin C (scurvy), folate (neural tube defects) and vitamin D (rickets). In much of the developed world these deficiencies are rare due to an adequate supply of food and the addition of vitamins to common foods. In addition to these classical vitamin deficiency diseases, some evidence has also suggested links between vitamin deficiency and a number of different disorders.

Some vitamins have documented acute or chronic toxicity at larger intakes, which is referred to as hypertoxicity. The European Union and the governments of several countries have established Tolerable upper intake levels (ULs) for those vitamins which have documented toxicity (see table). The likelihood of consuming too much of any vitamin from food is remote, but excessive intake (vitamin poisoning) from dietary supplements does occur. In 2016, overdose exposure to all formulations of vitamins and multi-vitamin/mineral formulations was reported by 63,931 individuals to the American Association of Poison Control Centers with 72% of these exposures in children under the age of five. In the US, analysis of a national diet and supplement survey reported that about 7% of adult supplement users exceeded the UL for folate and 5% of those older than age 50 years exceeded the UL for vitamin A.

The USDA has conducted extensive studies on the percentage losses of various nutrients from food types and cooking methods. Some vitamins may become more “bio-available” – that is, usable by the body – when foods are cooked.[37] The table below shows whether various vitamins are susceptible to loss from heat—such as heat from boiling, steaming, frying, etc. The effect of cutting vegetables can be seen from exposure to air and light. Water-soluble vitamins such as B and C dissolve into the water when a vegetable is boiled and are then lost when the water is discarded. 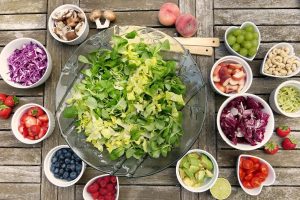