All white blood cells (WBCs) are known as leukocytes. Most leukocytes differ from other cells of the body in that they are not tightly associated with a particular organ or tissue; thus, their function is similar to that of independent, single-cell organisms. Most leukocytes are able to move freely and interact with and capture cellular debris, foreign particles, and invading microorganisms (although macrophages, mast cells, and dendritic cells are less mobile). Unlike many other cells in the body, most innate immune leukocytes cannot divide or reproduce on their own, but are the products of multipotent hematopoietic stem cells present in the bone marrow.

The phagocytic cells include macrophages, neutrophils, and dendritic cells, and function within the immune system by identifying and eliminating pathogens that might cause infection. 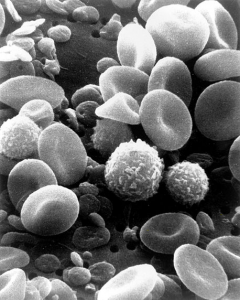