Zhang Zhong Jing (張仲景),  lived from approximately 150 to 219 AD. He was one of the most eminent Chinese physicians during the later years of the Han dynasty. He was also a pharmacologist, physician, inventor, and writer. He established medication principles and summed up the medicinal experience until that time, thus making a great contribution to the development of Traditional Chinese Medicine.

Zhang Zhong Jing masterpieces were the Shang Han Lun, (傷寒論, lit. “On Cold Damage“), which was mainly on a discourse on how to treat epidemic infectious diseases causing fevers, and the Jingui Yaolue (金櫃要略, lit. “Essential Prescriptions of the Golden Coffer”). 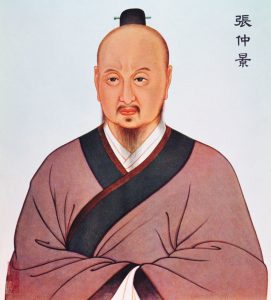